Understanding the coupling of cranial blood flow and the cerebrospinal fluid system: an in vivo and in silico study 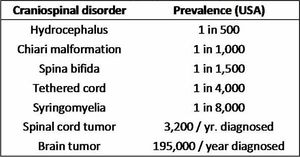 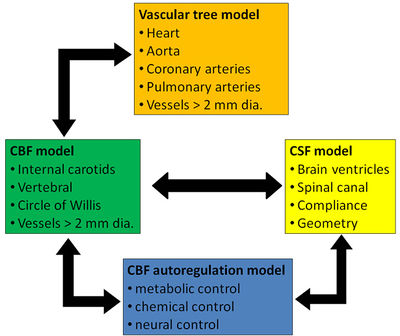 It has been postulated that pathological coupling between cranial blood flow (CBF) and cerebrospinal fluid (CSF) pulsations (Madsen, Egnor et al. 2006; Luciano and Dombrowski 2007) is an important factor influencing the disease pathogenesis of various craniospinal disorders including hydrocephalus, spina bifida, Chiari malformation and syringomyelia, tethered cord, tumors of the spinal cord and brain, and others (Table 1). Coupling of CBF and the CSF system has also been hypothesized to be important in cerebrovascular disorders including Alzheimer’s disease, vascular dementia, stroke, angiogenesis, cerebral ischemia and hyperemia, intracranial hemorrhage, among many others. To understand the complex factors governing CBF and CSF transport a number of in silico studies have been performed in conjunction with in vivo measurements. These studies can be divided into two major groups, those which focus primarily on fluid dynamics (Ursino and Lodi 1997; Cebral, Castro et al. 2003) and those which focus on cerebral autoregulation (Banaji, Tachtsidis et al. 2005).

While the past studies have provided insights into CBF and CSF regulation, there is paucity in studies focusing on how intracranial pressure (ICP) influences cerebral hemodynamics and autoregulation (David and Moore 2008). At present, understanding of the influence of CSF motion on CBF remains in infancy. Thus, the computational models have had limited application in clinical settings where, in many cases, the influence of CSF hydrodynamics is thought to have a strong impact.

We hypothesize that CBF and CSF have a coupling effect which plays a role in the biomechanical mechanisms responsible for craniospinal pathologies. The goal of this research is thus to design, develop, and analyze a coupled CBF and CSF in silico model and prove the efficacy of the model through comparison to in vivo and in vitro measurements.

The work plan will comprise the following phases:

A. In vivo measurements.

Our approach is to obtain detailed in vivo measurements on a healthy human subject pertaining to CBF and CSF pulsations which will be used to guide the in silico model development. The following measurements will be obtained:

B. In silico model development and testing.

The detailed in vivo MR and US measurements will be used to construct the coupled CBF and CSF in silico model. This model will take into account important properties of the CSF system including local changes in compliance, geometry, and flow pulsatility. The model will be tuned to accurately reflect the single healthy subject’s in vivo measurements.

The proposed in vivo measurements and in silico model addresses a significant gap in the fundamental understanding the coupling between the CBF and CSF system. The in vivo measurements will provide detailed geometric and flow conditions for the proposed study and other studies interested in CBF autoregulation. The in silico model will serve as a platform for future development and linking with comprehensive models of CBF autoregulation. If proven efficacious, the in silico model, which takes into account the entire vascular tree and CSF system, has the potential to provide a clinically useful tool for interpretation of bedside tests related to cerebral perfusion and CSF system function.

Ursino, M. and C. A. Lodi (1997). "A simple mathematical model of the interaction between intracranial pressure and cerebral hemodynamics." Journal of Applied Physiology 82(4): 1256-1269.