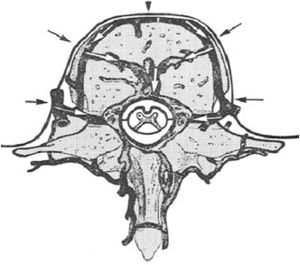 Figure 1. Transverse section through the spine. The abdominal pressure (black arrows) is transmitted along the veins (white arrows) and is reflected in the CSF which is represented as clear, unshaded region around the cord (figure and caption reprinted from Lockey et al.) (Lockey, Poots et al. 1975). 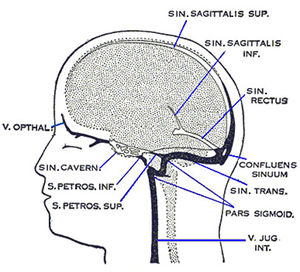 Some studies have quantified CBF velocity using transcranial Doppler ultrasound in the cerebral middle cerebral artery during CPAP (Werner, Kochs et al. 1990; Haring, Hormann et al. 1994; Bowie, O'Connor et al. 2001; Scala, Turkington et al. 2003). However, TCD measurements do not take into account changes in artery diameter which can occur, however minute, resulting from CBF autoregulation. Thus, the precise blood flow rate (ml/s) in the vessels of interest was not obtained, and total CBF was not measured. The proposed study investigates the influence of CPAP on total CBF by measuring velocity, rate, and lumen diameter in the internal carotid and vertebral arteries, and velocity in the middle cerebral arteries using duplex Doppler ultrasound with and without CPAP.

We hypothesize that an increase in CPAP will decrease CBF rate in healthy volunteers. The goal of this research is thus to improve understanding of the influence of CPAP on CBF dynamics in healthy individuals. 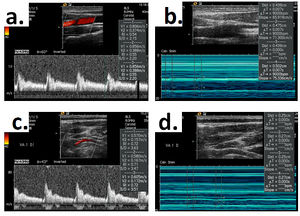 In vivo Ultrasound measurements. Our approach is to obtain CBF rate measurements before and during CPAP using duplex color Doppler ultrasound on 20 age-matched healthy non smoking volunteers (20-30 yrs.). Each subject will have blood velocity and lumen diameter in the internal carotid and vertebral arteries, and velocity in the middle cerebral arteries, measured with duplex Doppler ultrasound (Soustiel, Glenn et al. 2005). Velocity and diameter measurements will be conducted at least three times at each measurement location. These measurements will be obtained with subjects in the supine position with the head at 30 degrees at atmospheric pressure and after CPAP has been administered for 15 minutes at +15 cm H2O. Transcutaneous carbon dioxide tension PCO2 and oxygen saturation SO2 will be monitored during the entire testing period for each subject. Heart rate and blood pressure will be recorded before and after each test. Pressure test order will be randomized for each subject. Measurement reproducibility will be examined by performing the same measurements three times on three subjects.

The proposed work will improve understanding of how CBF in healthy volunteers is influenced by CPAP. The test could be further explored to investigate how CPAP influences CBF in patients with sleep apnea and various types of cerebrovascular and craniospinal disorders such as stroke and hydrocephalus. 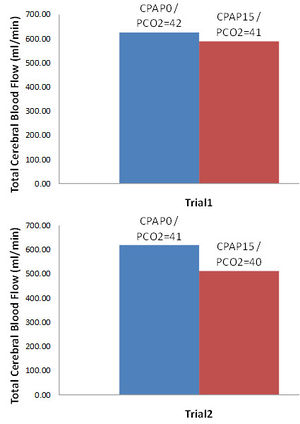